Inspiration to be famous, play with Lego, and think about a brain damaged cat. 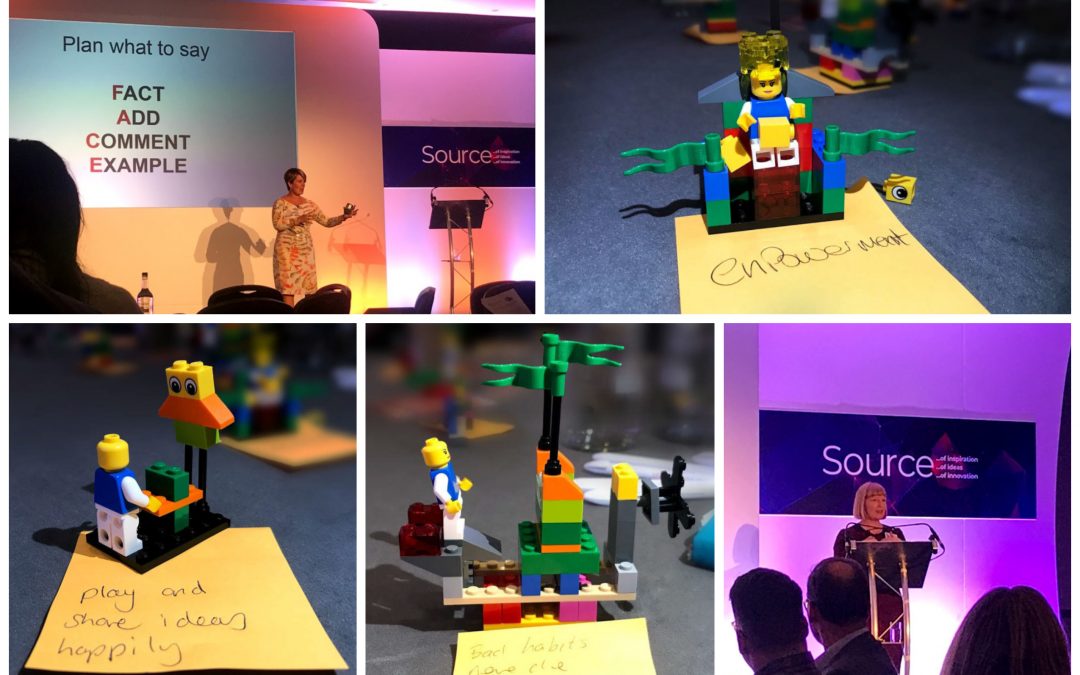 The Symphony Legal annual conference (which I visited a couple of weeks ago) promised it wouldn’t be your typical law conference. I knew they’d deliver on this promise when I walked in to see Lego on all the tables.

Yes, Lego in the board room – it’s a gimmick, probably unashamedly so, but there’s no denying it worked. Sara Traynor started off her talk on “Lego: Serious Play” with anecdotes and a little theory on how it improves collaborative decision making. But the proof was in the experience – a room of about 100 lawyers was totally silent for a few minutes as people quietly, happily built little Lego models. By this time, we had already been in the conference over a half a day – plenty of time for dominant and extrovert personalities on each table to start dominating, the shy and introverted to turn socially semi-transparent and the people in the middle to do what they do best. And here came the real value of the Lego models – when it came to explaining the meaning of our models, it shook up that social order and let everyone share their views.

I’ve read a bit about this before (and participated in similar exercises), and I’ve seen probably equal measure of praise and criticism. This is typical of the criticism: “Lego workshops are just one example of the nonsense that is creeping into the workplace. … The problem isn’t just that these exercises are pointless and silly. For a lot of people, this stuff can be really stressful… You find yourself being gaslighted, immersed in the kind of shared psychosis and group delusion found in cults… But to keep your job, you must play along.”

For me, everything is revealed with that last part of the quote “to keep your job, you must play along”. What activity wouldn’t be horrific if it comes with the threat of losing your livelihood? Lego in the boardroom seems like it might be a scapegoat here – the problem isn’t with ideas to make meetings fun, the problem is with a culture that enforces fun with existential threats. I feel there’s something fundamental here about the employee vs employer contract – should employees be forced and judged according to things that aren’t part of their job … I’m going to stop there before I get carried away. ‘Lego: Serious Play’ seemed to work well when not taken too seriously. Above are some pictures of the Lego models from people on my table, with a note saying what they represented. I enjoyed making mine.

The other talk that stood out for me was Penny Haslam’s talk on ‘How to make yourself a little bit famous’. It crystallised a lot of ideas that had been lurking at the back of my mind. Things that worried me. I’ve thought for a long time that there’s a conflict in making money in consulting. Being a good consultant means investing time in developing my professional expertise, but making money as a consultant means becoming an expert on self promotion. It often feels too much to do both.

So Penny’s talk (sharing her experiences from broadcasting) made self-promotion feel that bit easier. There’s one tip that stood out for me in particular: use FACE or ‘Fact, Add, Comment, Example’ as a guide to produce short video clips that are memorable and compelling – even if about topics that are potentially quite boring. We tested it out around the room – asking people about their pet. Memorably, someone came up with this: “I adopted a brain damaged cat from a shelter [the Fact]. She was born like that [Add a bit more]. It’s really rewarding to give happiness to an animal that could have been unloved [Comment]. She sometimes wanders around wobbling like a drunk and misses things she tries to jump on, but she has a happy life [Example]”. I don’t know quite what to think about that, but there’s no denying it stuck with me. So, I’m now committed to seeing whether I can apply this to create some snappy, memorable snippets about employee ownership!

Employee share scheme valuations: why, when, what and how.

3 reasons why it’s good for your company to be worthless: valuations for EMI schemes

An explanation of tax valuations for EMI schemes, and why a low valuation may be a good valuation.

Most EMIs are not affected by lack of EU state aid

In brief: a temporary breach of EU law by the UK government could (in theory) negate the attractive tax reliefs for EMI schemes. In practice, this concern only arises for EMI schemes breaching generous financial thresholds, and the average EMI scheme will not be...
Read More

Inspiration to be famous, play with Lego, and think about a brain damaged cat.

The Symphony Legal annual conference provided inspiration on how to work with others and market your services in a compelling way.

New to employee options? A quick guide for founders and employees

Employees with share options perform better. Founders: discover the fundmental issues for a share option plan. Employees: discover what’s in it for you.

How much of your company should you give to your employees?

The answer is easy - 10% to 20% of the company. The difficulty is understanding why and how to stick to that limit! Is this a legal requirement? No. The range of 10% to 20% is based on our extensive experience, of having advised over a thousand companies both on...
Read More

Using your own valuation for an employee share scheme

Granted specialists can prepare a valuation, agree it with HMRC and register it for you. But you might want to take a different approach: you may feel comfortable doing your own valuation, you may have an existing trusted advisor who can do this for you, or you may...
Read More

A founder risked everything by overlooking something with a key employee: agreements matter

I separately asked both the founder and the key employee participating in the EMI scheme what the emotional impact was of setting up the scheme and signing the option agreement. Their answers were starkly different.

A mention of patient capital in the 2018 Budget (1) made me reflect on how long term thinking is becoming more prevalent in management incentives and employee share schemes. The 2018 Budget announced a £20 billion plan and task force targeted at unlocking patient...
Read More